It is an honour and an encouragement to be receiving this award. Age does not lessen the fervour to write, but one is not so readily, to quote Auden, ‘hurt into song’.
I would like to thank the judges for their decision (I won’t enquire what strife went on [None. Ed.]), and of course Antonia and Victoria. It is both generous and gallant of Bloomsbury Publishing to establish this prize.
Antonia once sent me a postcard with a quotation, which I believe was from Cardinal Newman that read, ‘No pleasure is risk free’.
And so to literature, that potent brew, which my mother regarded as sinful. My two primary pleasures are Immersion and Rapture.
Immersion is going into a strange room with its splendours, its intrigues, its transports, its shifting narratives, and its dangers. All great books are also great fairy tales, and in that room of reading there is most often a lurking ominousness. But one stays there. The transaction between unknown author and unknown reader is already established. Within the radical wonder and the heightened intensity, the outside world with all its preoccupations recedes. We are led elsewhere.
I think of Bleak House, of Dickens, that master conjuror, who had the verve, the audacity, the genius to lift Inspector Bucket to the very highest tower of his imagination. It is not what we might have expected, but for Dickens, and all great writers, there are no boundaries.
The books I loved at an early age perhaps informed my more intense likings. Scores of women were drawn to the Bronte sisters, to their shriven fates in that freezing parsonage in Haworth, where there remains on display their little slippers so that a visitor can easily see that their feet were a size three or four. Tiny creatures whose dreamings, which is to say their writings, blazed with passion and are saturate with tales of unrealised love, love that in its way is deathless, since it declares itself from beyond the grave.
Alternatively, and at the same time, there was Miss Jane Austen, with her crisp, sensible, unfettered approach— ‘Miss Maria Ward of Huntingdon with only seven thousand pounds, had the good luck to captivate Sir Thomas Bertram’.
These are the authors, and dozens more, whose rooms have become part of my inner mythology, my life, and my solitude.
My other great pleasure is Rapture, a word which the snarling Mr Nabokov named ‘enchantment’. It is what gives a book its sorcery, coming as it does from the golden ore of the imagination. The effect is seamless because language has been so profoundly, so musically conceived, word after word set down with power of incantation.
What seems inevitable to the reader is in fact almost impossible to achieve, and comes at a cost, a rigour, a coldness of intellect, and an abiding fear—‘O word, thou word that I lack’. Language is what confirms the miracle of a book and the certainty of its survival. It has a newness and at the same time, the breath of an ancient flame.
I do not intend to delay you, but there is something I would like to say. A short time ago, I wrote an essay, ‘Is Literature a Dying Animal?’—it is not dying, but it is imperilled. There are many reasons for this—commerce, easier pleasures and distractions, and a blatant urgency to be heard, but without the transformation which literature entails. There is a tendency towards glibness, a chic banality, the careless language of social media that considers itself to be our Gospel.
True words, credible words, originate from what T. S. Eliot named ‘The dark foetus’. And that is not to be found in the soul of a machine.
But to end on a happy note, on this joyous evening, I will read you a few lines from a poem by Gerard Manley Hopkins, who when he entered the Jesuit order, made a bonfire of his writing, believing that they were not pleasing to God:

Find out more about some of Edna O’Brien’s favourite reads, with our Book of the Month, here. 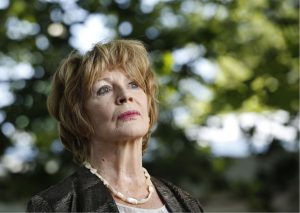 “For her glorious way with language, her persistence and her devotion to the truth, we are thrilled to award the Pleasure of Reading Prize to Edna O’Brien.”

Find out more about The Pleasure of Reading Prize, the projects it supports, and previous winners.