In 2015 HMP Wormwood Scrubs was one of the most violent prisons in the United Kingdom to be a resident prisoner. Stabbings and cuttings on a daily basis, sometimes two to three times a day, men freaking out on Spice, total chaos, even the Screws were scared to come to work. They went on an illegal strike sitting outside the jail because of the escalation of violence. That resulted in 24 hours ‘bang up’ for two days.

Then, out of the dismal darkness came a ray of sunshine, in the form of the Prison Reading Group. My first instincts towards it was ‘this is just another one of those projects to show the jail is seen to be doing something to get us out of the cells.’ I was slightly apprehensive and a little suspicious first meeting with Jenny and Victoria, who facilitated the group.

The books the group chose to read were mostly fiction, I had only been reading factual books until joining this group. Out of the blue, Officer Alan Gourley, a man I greatly respect, asked me to make a list of people for the reading group, which I did enthusiastically. The names I gathered were not your usual quiet men who attended these types of reading groups, they were hard core long term serving men like myself, whom under normal circumstances would be over-looked for these kinds of events in Scrubs.

To say the ‘Book Club,’ as we call it on the wing, is great, is an understatement. Meeting authors such as Oliver Harris, who wrote the Nick Belsey series of crime novels, was a fantastic opportunity, what a cool guy. We asked questions and discussed books that we had read and often exchanged views on a variety of subjects, ‘putting the world of jail to rights’ so to speak.

My heartfelt thanks to the Prison Reading Group and Give a Book, who helped me with my Open University by buying three books I needed for my course work on The Arts Past and Present. I actually miss you guys and the Book Club a lot. I hope the men in Scrubs make the days count, stop counting the days and take full advantage of the reading group; it is a great release from a mundane existence. Peace and Blessing flow!

His book Killing Time is available on Amazon. 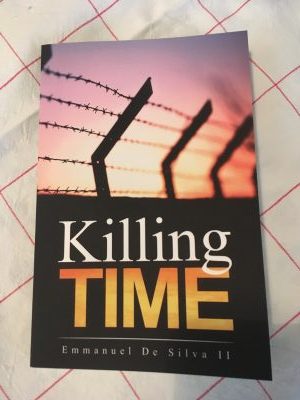