Give a Book was recently lucky to go to the excellent Penned Up Literary Festival at HMP Erlestoke and there to meet Lord Bird, charismatic founder of the Big Issue, who was speaking. We asked him – as we always do – what was the book that started him reading, and what was his special book. He told us.

The young John Bird was in Ashford Boys Prison, now Feltham, when a screw asked him “Do you want a book, boy?” John hesitated. The screw said, “You can’t read, can you?”  John knew some words but not all. He had a kind of word blindness that meant he couldn’t get the sense of a sentence, just a word here and there – he could read over a page but couldn’t say what it was about.  The screw gave him a copy of The Scarlet Pimpernel and a pencil telling him to underline all the words he didn’t know–this turned out to be all the little words. He might know ‘Constantinople’ but not the ‘theres’, ‘thes’ and ‘thats’. So he understood in a kind of staccato way, missing the connections.  This was his experience of borderline dyslexia.

He was in Ashford, rightly called a correctional facility, for 3 months.  The screw, the instructor, helped him to read–it was not his job but he did it anyway.

The book that John then ‘really put his back into’ was also given to him by an instructor: it was Lust for Life , a novel about van Gogh, by Irving Stone.

Lord Bird’s autobiography Some Luck was published in 2002.  He will be launching his new project The Chapter-Catcher, Towards a Revolution in Reading at Hay Book Festival on 23 May. 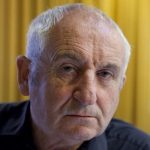