Mima, one of the Give a Book team, tells us about the 2019 PEN Pinter Prize ceremony, which took place in October.

Set up in memory of Harold Pinter, the PEN Pinter Prize goes to a writer who, in the words of Harold Pinter’s Nobel prize for literature speech, “casts an unflinching, unswerving gaze upon the world.’’  Lady Antonia Fraser, Give a Book patron and wife of the late playwright, said a few words praising the judges on their choice of winner.

‘This is the perfect way to mark the memory of Harold because, like him, the PEN Pinter Prize combines respect for great writing with an unquenchable concern for human rights.’

This year, the poet and author Lemn Sissay took home the prize alongside Befeqadu Hailu, an Ethiopian activist who was named this year’s International Writer of Courage.

Writer Maureen Freely, one of the judges, said:

‘In his every work, Lemn Sissay returns to the underworld he inhabited as an unclaimed child. From his sorrows, he forges beautiful words and a thousand reasons to live and love’

Both Sissay and Hailu gave speeches that had the audience entranced. Hearing the stories of these two writers, who spoke about the power of the written word and freedom of expression, was eye-opening. Hailu has been imprisoned four times for his writing but continues to uphold a platform for individuals to speak out against human rights violations.

Hailu delivered his acceptance speech in Amharic, the official language of Ethiopia followed by an English translation. He said,

‘writing is like using a sharp knife with two edges. It sharpens both the writer and their audience’

The word is a powerful tool, how individuals express intent is manifested through their words. Where we strike a balance between condemning hate speech and allowing freedom of expression was touched on during the speeches. Everyone has the right to say what they think without censorship, but where one person’s hate speech is another’s expression of opinion, differentiating between the two without creating a paradox is difficult.

Lemn Sissay gave a heartfelt thank you to Harold Pinter:

‘I met Harold Pinter when I was thirty six. We were on stage at The Royal Court. I was too intimidated or self-conscious to speak to him. And so I will now. Thank you.  What I like about this award is that it is from a great writer and a great organisation. I accept it as a sign that I should continue. All I have is what I leave behind. All I am is what I do.’

Lemn Sissay concluded with a performance of poetry about his childhood. A moving end to the evening and one which gave the audience food for thought. 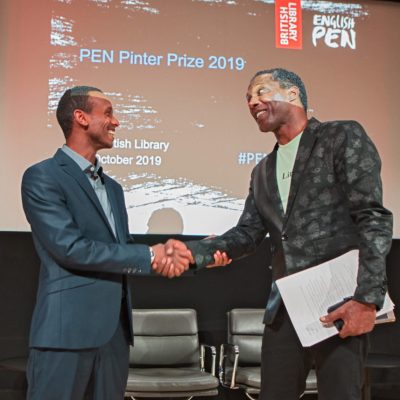