The Power of Cupcakes

There once was a cupcake. This was not just any cupcake but was one of the special Give a Book cupcakes baked for us by the wonderful Primrose Bakery.

Somehow—history does not divulge how– this cupcake became separated from its companions. Lonely and lost, Cupcake found herself travelling through the wilderness of the city at night—bounced in a box, dodging all manner of danger, dogs, cats, foxes, and people—abandoned, scared Cupcake’s nerve almost gave up.

She turned into a most unprepossessing street and suddenly, ahead, saw light in the darkness. There was an open door, and a glow of warmth inside. Cupcake made it over the threshold into a world where cupcakes– and cakes–and books– of all kinds, shapes and sizes– were treasured and made welcome.  At last Cupcake had company, at last she was home.

And so Cupcake told the story of her journey and cakes of all kinds heard. The power of one was transformed into the power of many.

Thank you to the London Review of Books! 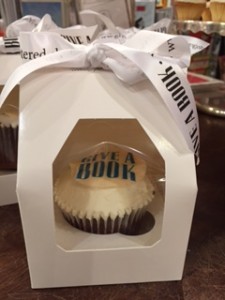 The London Review Bookshop  rewarded Cupcake for her pluck. Generously, they joined her in supporting Give a Book.
LRB bookshop and London Review of Books — we salute you and the power of cupcakes. 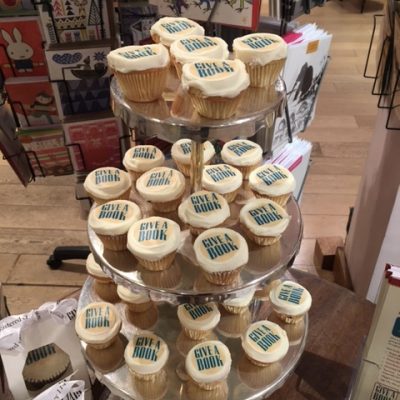