A Judgement in Stone by Ruth Rendell 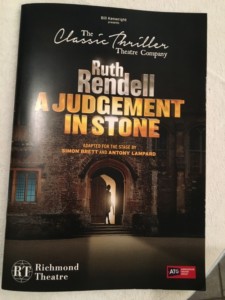 Give a Book was thrilled recently to go to an exciting evening in the theatre. A stage adaptation of A Judgement in Stone, by the late great Ruth Rendell, is currently touring in a new production presented by Bill Kenwright.

Ruth Rendell was first published in 1964 and wrote 80 novels as well as works for TV. She was awarded a CBE in 1996. She died in 2015. Give a Book remembered her with her choice of a favourite book here.

A Judgement in Stone is classic Ruth Rendell, with its brilliant and disturbing unfolding of character, plot and motive. To quote: Eunice struggles to fit in. When she joins a wealthy family as their housekeeper, the very reason for her awkwardness, long hidden and deeply buried, leads inexorably to a terrible tale of murder in cold blood – on Valentine’s Day. A lifetime of deceit, despair and cover-ups unravels in a shocking revelation almost as grizzly as murder itself.

The awkward Eunice is brilliantly portrayed by Sophie Ward, who is joined by an award-winning cast of Andrew Lancel,  pop-idol Mark Wynter, Deborah Grant, and movie icon Shirley Anne Field,  Antony Costa and Ben Nealon. The show has been directed by Roy Marsden and is touring until the end of July. Catch it while you can.

Give a Book was honoured that on a day last week the company performed the play for us, with generous words and a collection at the curtain call. We thank you. 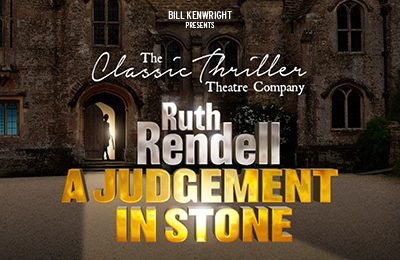