One of the joys of my being an author/illustrator is being lucky enough to run workshops encouraging others to have confidence in their ideas, and write and draw them. Workshops could be anywhere …

Four years ago I was invited to take part in the Beijing Bookworm Festival.  I ran workshops in various international school and bookshop venues,  but the highlight for me was working with Migrant Workers’ Children at a school on the outskirts of Beijing.  Along with other authors from different parts of the world, we travelled for hours – the driver got lost– by minibus along rutted roads through thick fog to reach the school and a fantastic welcome.  We each used stories from our own countries as starting points.  My story was about the Queen of England and her various crowns:

Did the Queen really have a special bath-time crown?  The children were intrigued by the story, and loved wearing some of the crowns and tiaras I’d just happened to bring along with me with me!  My young interpreter Bill wore his tiara with style.  Many young Chinese seem to think it’s cool to have an English name by the way, often choosing English names popular in the 1950s.  Afterwards the children drew their own brilliant stories, using comic strip formats.  As well as drawing and writing, they tried to teach me a few Chinese words, and thought it hilarious when I got the intonation wrong.

Last year I travelled round the Isle of Lewis in the Outer Hebrides visiting different schools, encouraging children to make picture maps.  At my first visit, on the island’s west coast, all seven of the school’s pupils had coughs and colds, so we ended up making a Book of Germs.

More recently I’ve hatched dinosaur eggs (with the help of children, paper, glue and scissors) in Newcastle’s Seven Stories Book Centre, and at the Guardian Big Draw in London, which I’ve been involved in for several years.

Some members of the Orchestra of the Enlightenment kindly improvised special dinosaur hatching music for this!

A month ago I encouraged piracy and treasure map making with children at Kendal’s Lakes International Comic Art Festival.  Tomorrow I’ll be at the Guardian’s Reading for Pleasure conference, encouraging primary school teachers and librarians to develop their creativity (and have fun!) at another workshop.  It’s very, very rewarding seeing stories brought to life by people of all ages and abilities!

Read more from Sally Kindberg on her blog. 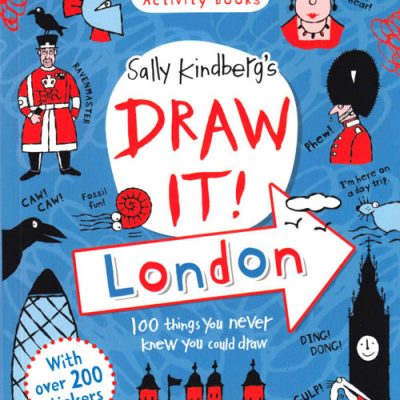