A little while ago Duncombe Primary School in London’s Islington approached us with a brilliant idea. Most of the children there have English as a second language and they hoped that using a wordless book would include those parents who were not fluent English readers in a celebration of stories.  The book they chose was the wonderful wordless story book CLOWN by Quentin Blake.

The children were given activities around the book to do with their parents over the holidays and work in class at the beginning of the following term was to be based around it.

The idea was that the entire school would participate in the same exercise even if their responses might be very varied – they might do a sequel, words to match the illustrations, alternative endings, more illustrations and so on.   The project was to be entirely inclusive–  no family could be left out because of their educational or linguistic shortcomings. The book would also form the beginning of the child’s own library which could be used again and again with their own children and with any relative from anywhere in the world.

With the generous help of Penguin Random House Give a Book was delighted to give a copy of CLOWN to every child in the school and to hear how their imaginations took off. The children used their diverse talents to produce work inspired by this delightful book including art, poetry, drama and story writing both in English and in their traditional language.  Parents and grandparents were encouraged to share stories from their own childhood.  The culmination of their efforts was a special assembly when the illustrator Chris Wormell  handed out prizes for the most creative pieces.

It was, a teacher told us, incredible.

We were pleased to learn that CLOWN is a particular favourite of Quentin Blake’s and here is what he wrote when some pages from the book were used in an exbition of his at the House of Illustration:

Clown is a story about a group of thrown-away toys. One of them, Clown, takes on independent life and goes in search of rescue. On show here are one or two pages where I started to write the story until I realised it would be better as a form of mime. I also liked this because it emphasises some of the elements which seem to me fundamental to illustration, such as telling a story by gesture and expressions. As there were no words I had to invent speech bubbles with pictures. The whole story has to be planned out and you will see in the storyboard how it is distributed across fifteen double-page spreads, leaving each at a point of suspense to encourage the reader to turn the page.

Quentin Blake: In the Theatre of the Imagination–An Artist at Work by Ghislaine Kenyon is out now. 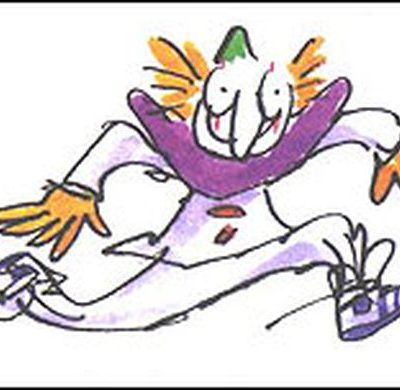