We’re delighted to announce that our friends at First Story have just launched their 2014 National Writing Competition.  The theme is ‘Home’.  They  are encouraging students from state schools across the UK to write stories or poems of 850 words or less on the theme of ‘Home’ – what does home mean to them? Is it a place, a smell, a taste, a group of people?

First Story believes in the power of creative writing to foster young people’s creativity, literacy and talent to build self-confidence, skills and aspiration. Through the National Writing Competition, open to all state secondary schools nationally, they hope to extend their impact as a charity beyond the schools in which they run creative writing residencies and encourage an active engagement in writing across the country.

This year for the first time they are offering an Arvon creative writing residential course for three winners (one in each Key Stage 3, 4 and 5) and three of their friends plus their teacher. Other prizes include:

James Dawson, author of Hollow Pike and Say Her Name and competition judge, says: ‘In an ideal world, every school student would have First Story every week. Until that happens, the National Writing Competition gives all young people (and their teachers) a chance to write for pleasure with the possibility of winning a fantastic prize.’

Kate Kingsley, author of the Young, Loaded and Fabulous series and competition judge, says: ‘Young people have a whole lot to say – but they’re all too rarely given a creative and nurturing forum in which to say it. This is exactly what First Story provides. It’s a wonderful project. The more young writers it can inspire by running open competitions like ‘Home’, the better.’

Anthony McGowan is the author of adult, YA and children’s novels including The Knife that Killed Me, Hellbent and Henry Tumor, which won the 2006 Booktrust Teenage prize and the 2007 Catalyst Award. Hellbent has recently been made into a film funded by a Kickstarter campaign. Anthony has previously been an Open University tutor in philosophy.

Bernardine Evaristo is a Fellow of the Royal Society of Literature and author of seven books including 2014’s Mr Loverman, which won the 2014 Jerwood Fiction Uncovered Prize. Other awards include the EMMA Best Book Award, Big Red Read Award, Orange Youth Panel Award, NESTA Fellowship Award and The Arts Council of England Writers’ Award 2000. Her books have been a ‘Book of the Year’ thirteen times in British newspapers and The Emperor’s Babe was a (London) Times ‘Book of the Decade’. She was elected a Fellow of the Royal Society of Arts in 2006 and she received an MBE in the Queens’ Birthday Honours List in 2009.

James Dawson is the author of YA thrillers including Hollow Pike, Cruel Summer and Say Her Name, and non-fiction books Being a Boy and This Book is Gay. In 2014 James was voted ‘Queen of Teen’. He previously worked as a primary school teacher and is currently a writer-in-residence with First Story and School Role Model for the charity Stonewall.

Kate Kingsley is the author of the YA series Young, Loaded & Fabulous and, most recently, a romantic novella for teens called Under the Mistletoe. She is currently a writer-in-residence with First Story.

Laura Dockrill is the author and illustrator of Mistakes In The Background, Ugly Shy Girl and Echoes, and is a performance poet who has appeared on stages including: Southbank Centre’s London Literature Festival, Big Chill, E4 Udderbelly, Latitude, Kosmopolis in Barcelona and Domino festival in Brussels. She has been named one of the top ten literary talents by The Times and one of the top twenty hot faces to watch by ELLE magazine.

Arvon runs residential creative writing weeks for schools, groups and individuals, in beautiful countryside locations. The courses, led by highly respected authors, include a powerful mix of workshops, individual tutorials and time and space to write.

The prize-giving event will be hosted at the London School of Economics & Political Science (LSE) in March 2015. The event will form part of LSE’s 7th annual Space for Thought Literary Festival, which explores the links between the arts and social sciences.

Give a Book gives books to all First Story pupils. 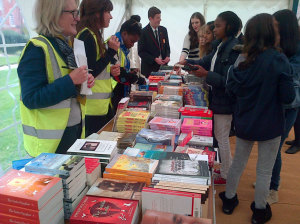 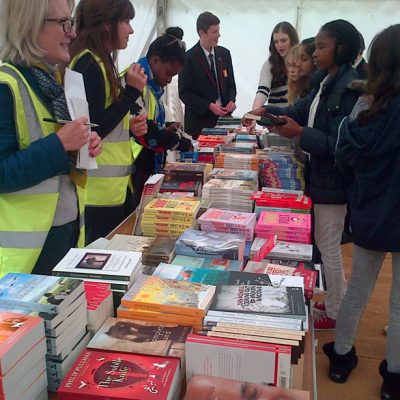