The new Book Room on a Wing in HMP Wormwood Scrubs is officially open.  The response to this project has been overwhelming: there’ve been wonderfully generous donations from Quick Reads and Granta.  PEN has given a whole World Bookshelf and has been supportive throughout. They put us in contact with the Cambridge Literary Festival who have donated an extraordinary 500 books.   It has been shiningly obvious throughout just how much kindness, imagination and thoughtfulness have gone into these donations. A box of books also arrived in The Room sent by Liberty. There’s more to come from other publishers and other sources which we’ll report on as we go.  There is also the glorious ongoing generosity of our own supporters for whom Giving a Book really does matter. The help and enthusiasm of Magdalen Evans, Volunteer at The Scrubs, has been invaluable. And last, but really of course first, it’s thanks to the staff at the prison especially David Redhouse, Deputy Governor and Michael Sherwood, Custodial Manager for B Wing, whose enthusiasm, enterprise, care and hard work have made this possible, from the initiative itself to the door of The Book Room now being open. 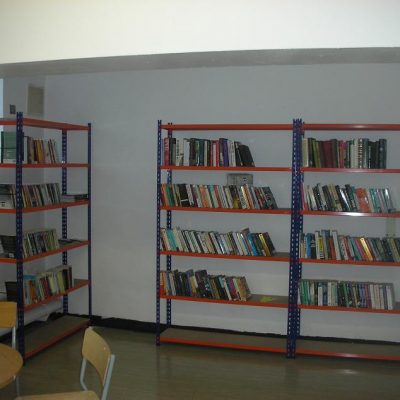