We’re delighted that we’ll be getting regular reports from the Prison Reading Groups that we’re supporting.  Here’s the first, from HMP Bullingdon on George Orwell’s 1984.
“The main character is Winston Smith, a civil servant who lives alone in a world where Big Brother – the state – rigidly controls everything: the laws, the media, everything. Every room in every building has a telescreen that can simultaneously transmit and receive. And nothing, not even a wink, is ever missed.
Winston’s job at the Ministry of Truth requires him to falsify historical documents on orders from BB. When the Ministry of Plenty decides to reduce the chocolate ration from 30g to 25g per week, Winston has to alter the old records and newspaper articles to make it look like the original ration was only ever 20g. Now the Ministry can claim it has INCREASED the allowance!
Winston is plagued by the lies but knows that even if anybody else felt as he does, they could never show it. Dissent is not tolerated by BB, and people are sometimes removed and never seen again.
Citizens are expected to love BB and are required to attend a regular ‘Two Minute Hate’, a message from the revolutionary leader broadcast to an audience over a giant telescreen. It includes shots of the enemy of the moment and people are encouraged to boo and hiss at the screen. Strangely, even Winston feels the urge to join in.
But it’s here too that Winston meets Julia, the girl he falls in love with, and O’Brien, who reveals himself as an enemy to BB. He also gives Winston a copy of ‘the book’, which denounces the power politics of the state.
Both love and the book turn out to be powerful and dangerous and Winston pays a heavy price.
This strange and exciting new life comes crashing down on Winston when the Thought Police smash their way into the secret room and drag him behind the impenetrable walls of the Ministry of Love for interrogation. It’s here that he is forced to face his greatest fear: ROOM 101
The book is thought-provoking. It’s also many different things to different people. It’s a love story, but also a story of betrayal on so many levels. It raises questions of freedom, political ideology and the duty of both the state and its citizens.
They say that every man has a breaking point. Does Winston live or die? Does he get the girl? Who wins? I’m not going to tell you that. But if it were me: would I roll over? Would I be a sheep? Or would I die fighting? The answer is: BAA!
But maybe that’s just me…the power of the state is scary.
Some members thought they’d read it before but then realised it was just because so much of the book is so familiar – Big Brother, Room 101, the power of surveillance. In any case it created a lively debate:
• This book becomes more relevant with each passing year • I’m young and when I read it on my own it didn’t seem relevant to me. I didn’t get past page 20. But listening to you lot talking, I’m keen to try it again.
• Was Julia (the girl) an agent provocateur or did she really love Winston? • Does this book warn us against communism?
And the one that summed it up for our group: • This book is a modern classic and a must read!”
The Bullingdon group is part of the Prison Reading Groups project. And this report also appeared in Inside Time January 2013.
Thanks for sending it. We love to hear from you.
Now go back to Give a Book. 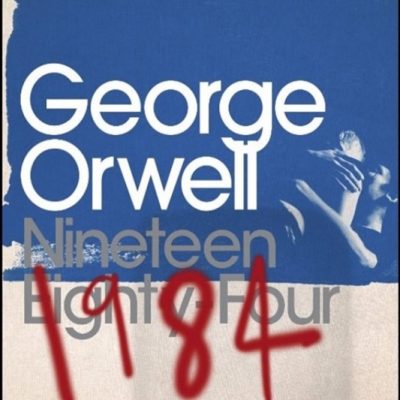